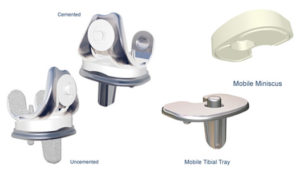 Development of a congruent tibilal component

In the natural knee joint (as in the artificial total knee prosthesis), the joint surfaces between tibia and femur are not conforming. Nature has placed a piece of cartilage – meniscus – between these two joint surface to provide for conformity. The meniscus, which takes up and distributes the stresses evenly between the non conforming surfaces of the tibial and femoral joint condyles moves a little during knee joint bending and stretching. This small movement helps the meniscus to conform better to the joint surfaces.

First step: The first tibial components were manufactured of polyethylene only – all-polyethylene components and were fixed by cement directly to the bone tissue of the tibia. They are still in use today, although their form may be changed a little. Soon, the surgeons & material scientists became anxious that the component made of polyethylene alone was too soft. It needed support from something harder.

Second step: Comes metal backed tibial component. The polyethylene plate articulating with femoral component got a metal backing. This hard backing should prohibit the deformation of the soft polyethylene.

The polyethylene inlay was rigidly fixed to the metal backing plate and thus immobile. Soon, this rigid fixation was considered a disadvantage and developement continued to a mobile polyethylene plate.

Third step: The peak of the development is at present the mobile bearing tibial component. The polyethylene plate that articulates with the femoral component lost its fixation to the metallic back up plate and became mobile. This design has two advantages:

An additional advantage is a more natural gait pattern and  a larger range of movement achieved with these total knee prostheses.

are available in two models:

1) for replacement of only one knee compartment

Such total knee prosthesis replaces the whole knee joint’s surfaces. See the picture of Rotaglide mobile total knee above. The polyethylene plate moves on the surface of a highly polished tibial tray. It is kept in place by the conforming metallic femoral component’s joint surfaces.

Who is the candidate for mobile bearing knee joint prostheses

The alleged advantages of mobile bearing knee joint prostheses are increased range of motion in the total knee and low wear of the polyethylene plate with lower risk for loosening. These advantages make this knee prosthesis suitable for young active patients.

The stability of the mobile polyethylene plate depends on well balanced ligaments and soft tissues around the new knee joint. The precise operation technique is essential for a good result.

The most frequent cause of failure in these prostheses is the accelerated wear, destruction, or dislocation of the mobile polyethylene plate in knees with ligament and soft tissues instability.

The discussion is still ongoing whether the “mobile” polyethylene plate really moves during knee movements, and if it moves, whether it copies the natural movements of the healthy knee parts.

As yet there are only reports on relatively small number of operations with mobile bearing knees (unicompartmental and tricompartmental)  and their results.

These reports show that between 93 and 96 % of tricompartmental mobile bearing total knees were still in function after 10 years.

The same figure of survival applies to unicompartmental knee prostheses.

Older radiological reports, however, shoved that up to  30 % of mobile bearing total knees have developed “radiolucent lines” around the total knee components.  (Hartford 2001)