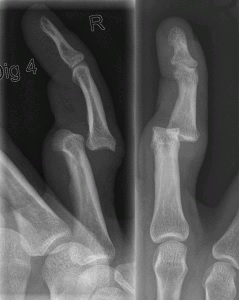 A dislocated finger joint is rarely seen in orthopedic practice, due to the inborn reflexive attitude of a person to protect fingers from injury. This can also be due to the fact, that finger movements are controlled by a large area of the brain. Thus, a person is more aware and apprehensive about ones fingers, which can be easily pulled away from situations that can cause injury to them. Being the terminal part of the hand, a finger joint when acting as a fulcrum has a very long lever arm and a very short load arm. Hence, injuries, like jammed finger (crush injury), sprained finger, and so on, are more commonly seen, rather than a dislocated finger.

What is a Dislocated Finger Joint ?

Dislocated finger joint occurs when an injury causes damage to the joint ligaments or capsule, such that the joint forming surface of a finger bone or phalanx is extruded out of the joint. Thus, a finger dislocation leads to failure of joint mobility and causes a stiff, swollen, and painful finger joint. Sometimes, a finger bone may also be broken along with the dislocation, in which case it is called a fracture-dislocation. Another situation is when the dislocation is incomplete and the joint surface glides in and out of the joint, when subjected to force in a particular direction. This is called subluxation, and is due to the laxity of the joint capsule or ligaments after an injury. A dislocated finger develops swelling within an hour after the injury. Though, this is the first symptom in any finger or thumb injury, but the swelling in a dislocated finger is highly pronounced and near a finger joint. The joint may appear crooked (Picture 1 & 4), when compared with the same joint on the opposite hand, due to the displaced alignment of the bones. Pain is less compared to other finger injuries, and is specifically felt on attempted movements of the affected joint. Joint stiffness is a highly specific symptom of finger dislocation due to the abnormal alignment of the joint surfaces. In short, a person with a dislocated finger will have a disfigured, fixed, and swollen joint that causes pain on attempted movement.

Due to the visual similarity of all finger injuries, one has to first confirm the presence of dislocation before initiating treatment for the same. This is easily achieved with a plain x-ray of the hand (Picture 3), which helps us to visualize bony injuries.

After confirming the diagnosis of finger dislocation, a person has to be evaluated for anesthesia fitness or given a high dose of analgesic, which is necessary for tolerating the painful maneuvers in dislocation treatment. An orthopedic surgeon, specialized in hand injuries is the best person for dislocated finger treatment. However, in the case of an open wound with damage to several minute structures clearly evident, a plastic surgeon’s opinion could be critical for accurate treatment.

Once the dislocated finger is relocated or reduced, it becomes necessary to maintain the finger joint in a stable position. This allows the injured finger joint capsule and ligaments to heal and regain strength. This can be achieved with a finger splint or buddy strapping for a period of 4 weeks. Needless to say, both these methods cause finger stiffness due to the prolonged immobilization or inactivity of fingers. This has to be countered with graded finger rehabilitation exercises and gripping exercises with a softball. A finger splint is a plastic or pliable metal with sufficient padding that is applied over the finger. It keeps the finger straight and prevents bending completely. A buddy strapping is when the injured finger is taped to an adjacent finger, which acts like a splint and prevents movements. A finger splint is ideal for severe injuries or fracture dislocations and subluxations, where even slight movements can cause misalignment and improper healing. A buddy strapping is better suited for mild injuries as it allows slight movements. This is helpful as it causes less stiffness of fingers compared to a finger splint. Thus, both the treatments have their own advantages and disadvantages.

A dislocated finger may be neglected or overlooked in an acutely injured patient, due to preference given to other severe injuries. In this situation, the classical symptoms of a dislocated finger are no longer seen and stiffness or disfigurement of a dislocated finger joint being the only clues appreciable. Due to the prolonged misalignment, there is degeneration of the joint surfaces and shortening of the ligaments and tendons across the joint, making it completely useless. So the treatment for such dislocations involves replacement of the finger joint rather than relocation or reduction. This is called silastic joint replacement.