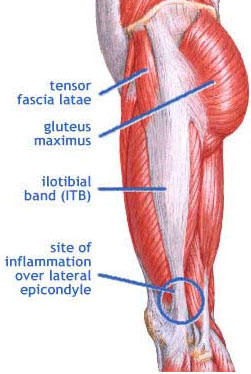 IT band injury or IT band syndrome is usually a trivial sports injury, but if neglected, over a period of time, it becomes quite severe. This is especially troublesome in athletes, who may have to skip running until recovery. IT band injury rest time can vary from few weeks to a couple of months, depending on the severity and duration of the injury. Inflammation and adhesion of inflammatory healing tissue to surrounding normal tissues, can threaten the complete recovery of the injured IT band. Hence, one has to follow a rigorous routine of physical therapy in the form of IT band stretches and other IT band exercises, which help in accurate and complete healing of the injured IT band.

What is IT Band Syndrome ?

The ilio-tibial band or IT band is a flattened tendon like structure which runs from the tip of iliac bone (anterior superior iliac spine) of pelvis, along the outer side of the thigh, up to the leg bone (tibia), just below the knee joint. It provides surface for attachment of the gluteus maximus muscle and tensor fascia lata muscle. It lies along the outer part of the thigh, and during bending of the knee (flexion), it becomes taut and moves forward due to the contraction of the muscles attached to it. This results in constant friction of the IT band with bony prominences, especially the lateral epicondyle of femur. Picture 1: IT Band or Iliotibial Band

Aggressive or repetitive muscle contractions, as occurs during weight-lifting, running, or cycling, can be particularly injurious to the IT band. A sudden increase in these activities can cause local inflammatory changes in the IT band over a period of weeks to months, which manifest as IT band syndrome (ITBS). Though, IT band injury and IT band syndrome are used synonymously, there is a slight difference. The term ITBS, is suggestive of an irritated IT band due to inflammation, which is not necessarily injured. But the term IT band injury can only be used if there is physical evidence of injury on MRI.

The IT band injury symptoms mainly consist of pain around the knee, especially during activities like running or jumping. IT band pain is classically felt on the outer side of the knee, but can vary in its exact location. Most people with this injury have pain slightly above the knee, where the IT band rubs on the lower end of thigh bone (femur). However, some may have pain slightly below the knee, where the band attaches to the outer part of the upper end of leg bone (tibia). In rare cases, like pregnancy or elderly individuals, the pain may occur near the hip, and is called IT band injury of hip. However, this is not at all related to sports or activity, but just due to an increased laxity of the hip ligaments, which puts additional stress on the IT band. With passing time, there is an increase in the severity and duration of IT band pain, which may also occur after activity and even during rest. Contrary to the popular belief, IT band tear symptoms are quite mild compared to the former, because of the laxity of the torn IT band.

Knee pain on the outer aspect can be attributed to a variety of causes, ranging from arthritis to ligament injuries, and so on. Hence, one has to rule out several important diagnoses related to knee pain, before labeling it as IT band pain. Basic investigations, like clinical examination and x-ray can rule out a plethora of causes. But it is only after an MRI of knee, that we can pinpoint the exact cause and location of the injury. Clinical examination by an orthopedic doctor also brings to light certain important clues, like

Thus, apart from investigations, examination by an orthopedic doctor experienced in sports injuries is quintessential.

IT band injury treatment requires the expertize from several modalities, like

It is highly essential to refrain from any sporting activity and take complete rest during the recovery period. Excessive reliance on any particular form of therapy with ignorance towards the other modalities can result in slower healing or even IT band contractures or shortening. This complication is very difficult to treat and may even require surgery. It has been observed that use of certain orthotic footwear prevents stress on the IT band and is encouraged during the recovery period. However, since this is at the cost of altered dynamics on the knee and ankle joints, one should not be using such orthotics after recovering from the IT band injury.

Hi About 4 years ago I fell off the deck, landed on right hip on cement did not break my hip but twisted both ankles which found out 3 weeks later fractured them I landed with a fluffy coat on that must have protected my hip Over time was having a hard time walking up slight in grades then to stairs then to walking when I stop walking the pain stops I had injections done (at the start no low back pain after injections now I do and my right hip still hurts tried physical therapy hurt worse
Ortho Doc said it band use the pool I did could hardly walk. only had a MRI of low back not right hip can MRI show any damage to the it band I now am on disability and do have Osteoporosis